It was so nice talking to you on Friday! I hope your weekend was good! It looks like an inside day- lots of rain coming down. It will help to green up the lawns! As I told you on Friday, I'll be putting some Mother's Day crafts/ideas on our teacher page. You may have ideas of your own, too, and you may want to make more than one of a certain item. I know Nans, Grams, Aunts and Godmothers are important too! Have a great week! Stay safe!

Coby put Riley to work to follow his scavenger hunt clues! He even got Gunner in on the fun! When Riley unscrambled the words in clue 5, the words said FEED GUNNER. Way to go Coby, Riley and Gunner!! :)

A lot of new work has been assigned to the SplashLearn.com site. As always, if you begin an assignment and it is too difficult, exit, and try something different. Our class code remains the same: MYGZCN. Have fun! :)

Some words sound the same but they have different meanings. These words are called homonyms. Get help to name 5 pairs of words that are homonyms. Use the words to write 10 sentences.

Example: weather and whether

weather- We are hoping for sunny weather!

whether- Whether we like it or not, we aren't going to school.

Using as many of these words as you can, create a poem: buds, mud, rain, tulips, windy, eggs, green, mild, puddles, birds, nests, cloudy. Remember, poems don't have to rhyme. Draw a picture to go along with your poem.

Create a scavenger hunt, with written clues numbered 1-10, for another family member to complete.

Example: 1. Look under my bed for a green stuffy. 2. Take the stuffy and place it on the front step. 3. Pick up the 3 rocks on the step and put them beside the shed.....(just some ideas to get you going- have fun with it- try to make someone laugh!).

Write about a special vacation. Where was it? What did you do? Why was it special? Share your feel good story with your family.

Visit hww.ca for fantastic videos of Canadian animals. Explore the site. You may find things in The Wild Gang that you like too.

Break out the cards, and try the following games! Have fun! No cheating!! ;)

I spy with my little eye

This card game is for two players. You will need one deck of cards with the picture cards removed (40 cards remaining).

4.     If the second player misses any pairs that add to the number, then player one may claim them.

5.     The players alternate taking turns and continue until all the cards are gone.

6.     The winner is the player with the most cards at the end of the game.

7.     As large gaps appear in the array, move the cards closer together to fill those gaps.

You could change the operation to multiplication.

You could also add/multiply pairs of cards diagonally.

First to add it up

This card game is suitable for 2 – 4 players. You will need one deck of cards and pencil and paper to keep track of each player’s scores. In this game, picture cards = 10 and ace = 1.

1.     Shuffle the cards and have them in the center facing down.

2.     One player draws 3 cards from the deck and lays them face up in the middle.

3.     Players must add the 3 cards to find the total. The first player to call the total of the 3 cards is awarded that number of points.

4.     No points are awarded for an incorrect answer.

5.     Play continues with each player having a turn at revealing the 3 cards.

6.     The winner is the player with the highest number of points when all cards have been turned over.

This card game is suitable for 2 players. You will need one deck of cards with the picture cards removed. In this game aces = 1.

1.     Deal out half the cards to each player with the cards facing down in a pile.

2.     Both players take the card on the top of their pile and lay it face up in the middle.

3.     The first player to call out the product of the two cards wins both cards.

4.     If it is a draw the cards are left on the table. Turn 2 more cards over and whichever player wins, picks up all the cards in the middle.

5.     The winner is the player with the most cards once all the card have been used.

This card game is suitable for a small group. You will need two decks of cards. Remove the picture cards from both decks.

3.     One player takes on the role of the caller. That player flips a card over from the pile in the middle and calls out the number of the card, e.g. 6.

4.     If the card called out matches one in the player’s array, that player turns that card over so it is facing down. It doesn’t matter what suit the card is.

5.     The first player to turn 4 cards over in a row, either horizontally, vertically or diagonally, is the winner.

This is a card game for 2 players. You will need a deck of cards with the picture cards removed (Jack, Queen, King, Joker). The ace can be used as a 1 in this game.

2.     Shuffle each pile so they’re in a random order and place face down on the playing surface.

3.     Players take turns turning over the top two cards. They add the two numbers using the counting on strategy: count on from the larger number, and count on the smaller number. For example, if the two cards turned over were 8 and 4. They would start with 8, count on 4: 9, 10, 11, 12.

4.     If players have the correct answer, they get to keep both cards.

5.     If the answer is incorrect the other player can have a go at answering the question to keep both the cards.

6.     Continue play until one of the piles run out of cards.

7.     The winner is the player with the most cards at the end of the game.

This is a card game for 2 players or a small group. You will need a deck of cards with the 10s and picture cards removed. The ace can be used as a 1 in this game. You will also need a sheet of paper split into 4 columns labeled thousands, hundreds, tens and ones.

1.     One student shuffles the deck of cards and places it in the middle face down.

2.     Players take turns to pick a card from the top of the deck and turn it over.

3.     The player must decide where to place the card, either in the ones, tens, hundreds or thousands place. They add the card to the column on their sheet of paper. The card is to be placed before another card is drawn from the deck.

4.     Players keep adding cards to their sheet of paper until all columns are filled in. The winner is the player who produces the largest number.

I hope everyone is doing well. It's a dull day, and not very warm. :( Only 4 days left in April- the month went quickly. This week I am giving you some card games to try- I hope you enjoy them! Feel free to sent along pictures for our teacher page. Talk to you soon! Stay safe!

Coby Lynch is an Earth Day Superhero!! :) He has been busy completing several of this week's activities!! He made the egg carton tree, and pinecone feeder. He helped his Dad clean up branches and he found a tiny, empty nest for his diorama. Coby's recycled feeder has been attracting blackbirds and blue jays. :) During a walk with his family, he practised skipping rocks into our beautiful river (he beat his record of 3 skips). On top of all this, you may have noticed that the tooth fairy was called to his house! Way to go, Coby!! Keep on hugging trees!! :) :)

Ava decided to make a bird house instead of a bird feeder. Great job, Ava! The birds will be safe from the wind and rain, and will have a safe place to nest! :) P.S. Thanks to Ava's Dad, who helped too! ;)

There are 3 things you must do every day:

2. Spend time with your family cleaning up your yard/property. There may be garbage to pick up, dead branches to haul away, decks to sweep off.....

3. Get help to find a recipe for plain (white) muffins. Prepare batter. Once the batter is ready, pour equal amounts into 3 bowls. Using green (for land) and blue (for water) food colouring, mix the green into 1 bowl and the blue into the other 2 bowls. Using fractions, this shows us that 1/3 of Earth is land, and 2/3 is water! Now into the muffin tins...1 scoop of green and 2 scoops of blue in each hole. Enjoy! Yummy!

4. Go online and listen to "Earth friendly" books- Something from Nothing by Phoebe Gilman, and The Giving Tree by Shel Silverstein.

5. Suncatchers- you need coffee filters, and green and blue food colouring. Place a piece of plastic wrap/wax paper on counter. Place a coffee filter on top. Now 1 quirt of green (1/3 land), then 2 quirts of blue (2/3 water). Repeat until filter is covered. Let dry and put in window. So pretty!

8. Sit with your family and make a two-part list....on one side of the paper list things that you and your family do to help the Earth, on the other side list a few things you can get better at, or begin to do. Post on fridge as a reminder to everyone.....

9. Make a diorama using stuff you collect from your yard. Twigs, bark, moss and tiny rocks are a few things you can use. Look online to see a variety of dioramas. An old shoebox works best but other cardboard will do. Make whatever type of diorama you want. Add in some small toys/trinkets. Have Fun! Be creative!!

10. Go outside and find a pinecone. Tie a long string around the pinecone, leaving a long piece of string at both ends. Now put honey or peanut butter on the cone, and roll in bird seed/vegetable scraps. Tie onto a tree. The birds will love you! :)

I hope everyone is doing well, and enjoying the bright, sunny morning. Make sure to look at the short video of Baby Billy waving to us- it will put a smile on your face! :) As you know, Wednesday, April 22nd., is Earth Day. In fact, it is the 50th. anniversary of Earth Day. This week people of all ages in 121 countries around the world will do things to help our planet have a better future. It is very important that we be a part of this, so this week's home learning will include 10 Earth Day activities/projects. Pick what you like! Have Fun! Stay Safe! 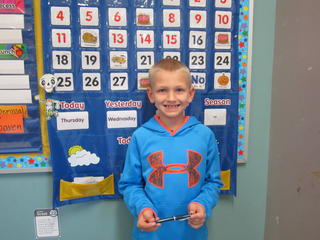